CORDELE, GA – Local farmers are praying for more rain, and “on guard” for corn rust.

The disease has been detected in four counties so far in Georgia, with other reports from Florida and Louisiana.

South Georgia Television News Meteorologist Matthew Crumley spoke to a local extension agent for more on how growers can “bust the rust” and protect their crops.

“So what’s been hitting the media recently is Southern Corn Rust which is nothing new for the area, but for this year, 2022, we’ve seen it a little earlier than we normally do,” said Joshua Grant, Crisp County Extension Agent.

“It’s considered a tropical disease that usually gets wind-blown in. We’ll see it in Florida come on up into South Georgia, and usually mid-June into July is when we are really looking out for it,” said Grant. 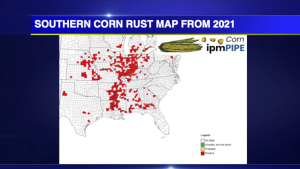 “Southern Corn Rust is a fungal pathogen. When you see it out in the field you’re going to see pustules on the top part of the leaves. Whereas, a very similar pathogen Common Rust you can find its spores on the top and bottom side of the leaf,” said Grant. 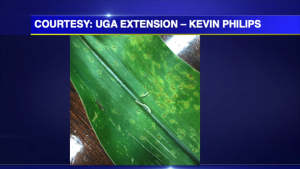 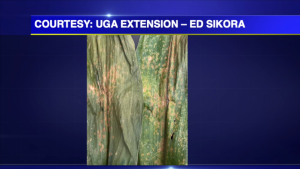 “The perfect conditions are very similar to what we have right now. It really likes hot weather, and it likes humid weather. We aren’t getting precipitation of course. We’re really in a drought situation. But, early in the morning if you walk through a crop, and there’s dew on the crop, or you’ve got your pants or your shirt wet you know that within that crop canopy there’s still a high humidity even though precipitation is low to null over the past couple weeks,” said Grant.

“So these kind of conditions 80 degrees Fahrenheit and up, definitely, Southern Rust will be able to transfer once it’s in a crop from plant to plant,” said Grant.

Grant recommends spraying all labeled fungicides for the disease.