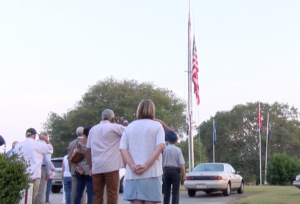 (ALBANY, Ga)- Monday will be the 100th Veterans Day in the United States, and for quite a few local veterans, each one means so much to them.

“It’s because of our veterans and our active personnel serving to this day, that give us these rights, and the hope for the future. And it’s the one time of the year that we can honor them and thank them for their service and their sacrifice,” says American Legion Post 30 Commander, Daniel Brewer.

Across Southwest Georgia, some like Albany Technical College have already held their Veterans Day ceremonies.

While Maureen Price of Leesburg is commemorating Veterans Day in her own way.

By putting together the city’s Second Annual Veteran’s Day 5k.

Price tells us, “My husband is a veteran, he’s been a veteran for 17 years. He served in the army, and I’ve always wanted to do something because his grandfathers and father are veterans. His brother is currently serving. So to me it’s important.”

As hundreds of veterans from across Southwest Georgia get set for Veterans Day on Monday, the 11th, the American legion of Albany is hoping for one other thing…

Brewer says, “I hope people will take the time, when they see a veteran with an American Legion hat on, or the American Flag, they’ll thank them for their service.”

-2nd Annual Veterans Day 5K at the Lee County Board of Education in Leesburg, on Saturday, November 9th at 9 A.M. Registration costs $25 for the 5K and $5 for a one mile fun run.

-Veterans service at Terrell Academy in Dawson at 10:00 Monday morning.

As more events are announced, we will update the list.