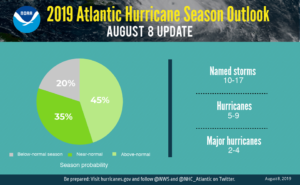 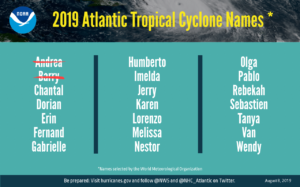 So far this year only two named storms have formed and now the peak months of Hurricane Season, August through October have started.

“NOAA will continue to deliver the information that the public depends on before, during and after any storms throughout the hurricane season,” said Neil Jacobs, Ph.D., acting NOAA administrator. “Armed with our next-generation satellites, sophisticated weather models, hurricane hunter aircraft, and the expertise of our forecasters, we are prepared to keep communities informed to help save lives and livelihoods.” – NOAA Statement

NOAA’s Climate Prediction Center have increased the likelihood of an above-normal Atlantic Hurricane season to 45%. The likelihood of near-normal activity is now only 35%. Below-normal resting a 20%.