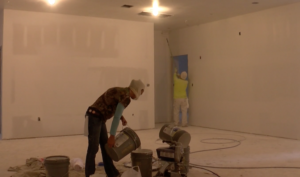 (ALBANY, GA)-Since breaking ground on it in June, Liberty House of Albany has been busy building a new shelter to help domestic abuse victims.

“We’ve been in our current shelter since 1984, and while it’s served us well, it’s not built for the work we do. So having a shelter specifically built for our needs, that’s exactly the way we need it for those that we serve,” says Liberty House Executive Director, Diane Rogers.

The new facility, while being able to house the same amount of people as their previous facility, does offer help for those who have been harmed by domestic violence.

Rogers says they plan on helping family members who’ve been indirectly harmed by it.

She tells us, ”Our new shelter will have the capacity to have services within the shelter. We’ll have space for a playroom for the children, teen room, for our teens to have counseling, as well as tutoring and after school work…”

With the new shelter being a safe haven not just for domestic abuse victims, and their families, it’s a big step to helping victims.

“When individuals who are victims of domestic violence come to us, they need so many services, and now we’re going to have enough space to provide all of the services those individuals need. It’s an environment that is much healthier, and provides much more space.”