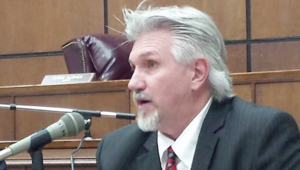 (AMERICUS, GA)- Just over 6 months after announcing he had been diagnosed with a rare form of cancer, Senator Greg Kirk passed away Sunday morning.

When South Georgia TV spoke with the Senator in June, he told us about what the support the state had given him.

“The Lieutenant Governor said, ‘Senator, my office is going to handle all of your constituent issues.’ So they have done that, they’ve taken over for me, and said ‘you just focus on getting better’ because we want you back in January in Atlanta…” said Kirk.

Throughout the week, there has been an outpouring for the 56 year old senator, with Governor Brian Kemp saying a few words for the man who represented Georgia’s 13th District.

And the people of the 13th district offered their support to kirk and his family through this difficult time.

The Senator said, “So many cards have come in, so many people have come to see me from our district. There’s been so much words of encouragement from all over, and I have just been encouraged, and I’m honored.”

Perhaps his biggest accomplishment during his time in office is his support of the Hot Car Bill, one that the Senator has held near and dear to him.

When we spoke with the Senator in June, he had plans that would help to better protect people against shootings.

Kirk said, “We have these mass shootings that we talk about. I have a bill that I drafted that’s in this year that would give free renewals of gun permits.”

No funeral arrangements for Senator Kirk have been announced at this time.