Fire chiefs from across the state meet in Albany 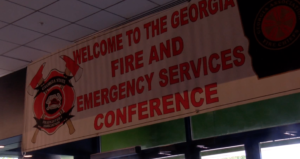 ALBANY, Ga. – For the first time since 2013, fire chiefs from all over Georgia are meeting in Albany for the annual fire services conference.

“People get their continuing education from the classes that are hosted during the conference. others get certifications with some of the classes held, and there’s training that is done where people get hands-on training,” Anderson said.

In addition to firefighters getting hands on training and certification,
there will be competitions testing some of their skill sets for the public.

But the best of the best firefighters in the state will be honored during the four day conference.

“We’re able to take a look at our fire fighters throughout the state, and reward them with some prestigious awards. those awards, most of them will be with the governor in February at the Capitol also,” said Charles Wasdin President of Georgia Association of Fire Chiefs.

But more than that, the conference also serves as a reminder of why fire chiefs and firefighters lay it all on the line – as a memorial to all of the lives lost in fires during the year.

With each person, represented by a pair of shoes, and serving as a reminder of what the firefighters are trying to stop.

“So there have been all different kinds of causes, and we just want to make people aware, and not be complacent with it, to actually check your smoke alarms. Change them out every 10 years, and change the battery out once a year,” said Laura Coleman, president of the Georgia Public Safety Educator’s Association

A 5-year-old girl was killed in a stabbing incident in Chicago, police say