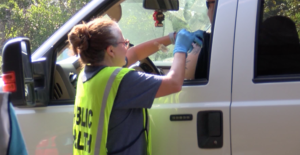 (ALBANY, GA)- Since the start of the flu season in the Fall, more than 40 people in Georgia have passed away to the flu.

With five of those deaths being in South Georgia.

Dr Charles Ruis with the department of public health says the season could go either way.

“Those numbers are showing a little bit of improvement. So that could mean that the worst is behind us. But it would be unwise to draw that conclusion. We could still have two more months of heavy flu activity,” says Dr. Ruis.

He Says that the Department of Public Health has seen most of the flu death’s this season have had a couple things in common.

Dr. Ruis tells us, “There is a pattern this year, and it is pretty common. The majority of the deaths from influenza this year have been in the elderly population of 65 and older.”

While it may still be up in the air on which way the rest of the flu season could go, Dr Ruis says now isn’t the time to let up or stop practicing good hygiene.

He says, “The flu shot doesn’t always protect, and so, whether the person has had the flu shot or not, it’s best to try and avoid being around people with the flu..”

If all else fails and you or your children are sick, Dr. Ruis says to stay home.