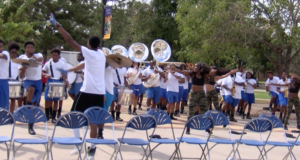 for the City of Albany, this week brings a major impact to the Good Life City.

“And whereas Albany State University during the Homecoming Weekend brings more than 25,000 alumni and supporters to the area.And generates more than 3 million dollars to the local Albany-Metro area,” says Mayor Hubbard.

In addition to the millions of dollars coming into the city throughout the week, Homecoming also helps to show off the growth of the City of Albany.

Especially since the city will be hosting several events throughout the week, including concerts, parades, and a street fair.

ASU Vice President of University Relations, Dr Wendy Wilson says, “It has a huge impact; it has an opportunity for us to gather as a greater community. It’s not just about alumni, faculty, staff and students. But again, the greater constituency that helps to drive that economic engine here in Albany.”

The students are also excited to be part of an event that’s part of the city for the week.

President of Albany State University’s Student Government Association, Quadre Curry Wilkerson tells us, “Homecoming means the students are at the center of everything. They’re gonna be interacting with alumni, they’re going to be going to events and seeing.a queen crowned. So we want to make sure students start off with a lot of energy, with excitement with the band and dancers. So they know they should be getting hyped and energized for the week. So it feels good to get that started off.”

As Homecoming week continues to roll on, more of the city will celebrate with ASU.