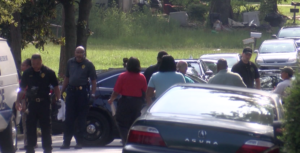 (ALBANY, Ga)- In the span of less than a week, two young adults, Quamiya Jones, 17, and Kawoski Newberry, 20, were killed in shootings.

” I will say to any person out there who knows anything about what happened to contact the chief. They would contact the police department, and share the information,” said Albany Mayor Dorothy Hubbard at the Law Enforcement Center.

The shootings have also started to cause a stir on social media, with the Dougherty County School System increasing security in the schools throughout the week.

But as Dougherty County School Police Chief, Troy Conley said it may not be the end.

Conley says, “This weekend, we have football games, tonight and tomorrow night. So there will also be an increased presence at all of our sporting events.”

As Albany Police Chief, Michael Persley said during the news conference Thursday, the worst thing people can do is live in fear.

Chief Persley says, “We are calling upon all citizens to take a stand against this type of behavior, and do not live in fear in this community. We…I as your chief, are calling on you as a collective group to be committed to keeping this community safe.”

Law enforcement will be working in the coming days to put people at peace despite rumblings on social media of a potential gang war.

While some, like Albany State University Professor, James Pratt Jr, want to see the violence come to an end.

Pratt told us, “We’ve seen these trends go on and on and on in Albany for a long time, and so I think it’s part of a systematic thing here in Albany that we’re trying to rectify.”

Both investigations into the two shootings are still active at this time.