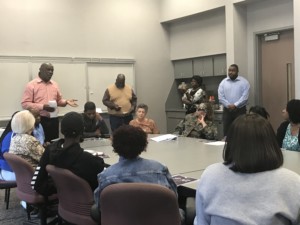 (ALBANY, Ga)- What’s been known as the Albany Gang Task Force, is now going by a new name: The Criminal Network of Gang Action Task Force.

With this month’s meeting focusing on addressing the roots of gang violence.

Concerned citizens and law enforcement officials spoke about some of the root causes for gang crime happening.

Such as how impressionable and at-risk children are targeted and recruited.

“Most times, they’re recruited by a gang leader, or they’ll be forced to join,” says Albany resident, Wendell Williams.

With some saying the problem could even be as glaring as kids being homeless and out on the street.

Cheryl Calhoun of Open Arms in Albany’s response was met with praise from those in attendance.

She plead with the community, asking, “How many of you are really willing? How many of you are willing to drive by Highland and see a 12 year old standing on the corner, and wind down your window and say, ‘How can I help you, Darling?”

The Albany Housing Authority will be hosting a series of events in November to help address the problems discussed in the meeting.