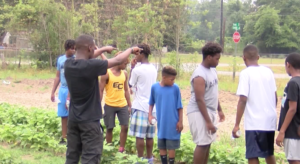 (ALBANY, GA)- For 20 year old community activist, King Randall, this coming weekend means a lot to him as he is bringing back a historical march.

He tells us, “On January, the 4th, we will be doing the I Am a Man March. We will be re-birthing the march from 1968, from the late 60s. It’s the Memphis Sanitation Strike where workers were basically trying to let their bosses and men know that they are men too.”

The “I Am A Man March” that King plans on having in Downtown Albany this weekend is going to be just a little different though from the last one in the 60s.

As the focus will be on the mental health of men across Southwest Georgia.

Randall says, “This weekend, we’ll have counselors and therapists here, as well this weekend for men to be able to come and talk about their issues. We’ll be helping men register to vote, and we’ll also have people here to help them legitimate their children as well. So that way, they’ll be able to have as many rights to their children as mothers do.”

But for King, to have the I Am A Man March take place in Albany has more than a little historical significance.

King says he wanted to do this in remembrance of Martin Luther King Jr, who was going to lead the march in Memphis, but was assassinated.

“So I definitely wanted to give us an annual event, this will be annual where men know they can come and meet, and discuss things we should be doing for the rest of the year, because this is our new year. We will start the year after this march, going and talking about taking care of our children, our families and protecting our community,” says Randall.

The pre-march events will start at the Veteran’s Park Ampitheater on Saturday at 10 A.M. and go to 12:45, with the march starting at 1:15.