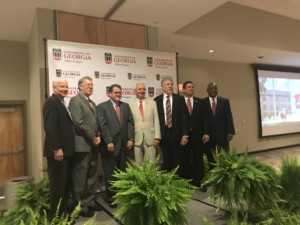 (TIFTON, Ga)- It was a packed house at the University of Georgia’s Agricultural Campus in Tifton, Friday morning.

As university and state officials come together to celebrate the school’s 100th anniversary.

In addition to the memories from UGA officials past and present the school is also celebrating with the opening of a Centennial Garden.

It’s not just state and university officials elebrating the centennial. The University of Georgia students were also getting in on the celebration.

More than 40 students on the Tifton Campus were able to show off their research in a symposium following the ceremony.

As well as what it means to them to be a part of the centennial.

1st year graduate student, Ashton Wheeless tells us, “First off, it’s a blessing to be able to be part of such a wonderful event. To see this campus that I love so much celebrating 100 years, and to see my research as part of that, it’s such an honor.”

As University of Georgia Academic Dean, Sam Pardue said to those in attendance, following Friday’s events, “… tomorrow, this campus begins its second century.”

UGA closed off the festivities Friday night with fireworks on the Tifton campus.

Food waste apps are battling to sell your leftovers

Food waste apps are battling to sell your leftovers