CORDELE, GA – Twenty-eight years ago is a day Southwest Georgia will never forget thanks to Tropical Storm Alberto as it barreled over the region dumping flooding rainfall that resulted in a catastrophic disaster across southwest Georgia.

Twenty-five inches of rain fell from Americus up to Montezuma that resulted in the breech of the Lake Blackshear Dam in Crisp county. 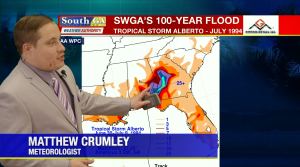 Meteorologist Matthew Crumley talked to some of the people on the ground that day and Crisp county Sheriff Billy Hancock about this one hundred year flood.

“You’re watching coverage of the Flood of 1994, I’m Lee Wright, we’re in the helicopter of the Georgia State Patrol. Our thanks to post thirty again,” said Lee Wright, Retired Program Director of WSST. 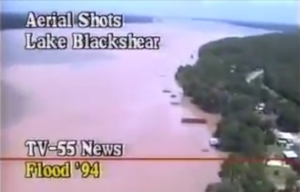 “We were up for days. I remember we went four or five days not sleeping. I remember the governor coming down and being in our courtroom at our Sheriff’s office talking to the people, the emergency management director for Georgia at that time, Mr. Gary McDonald was here,” said Crisp county Sheriff Billy Hancock.

“It was a good two weeks or so before we were back to where we could fully operate, and then we weren’t back to normal, because people were out of their homes. And, when people are out of their homes the law enforcement side takes over, and then you got to go and provide security in those areas to make sure no one is ravaging those homes,” said Sheriff Hancock. 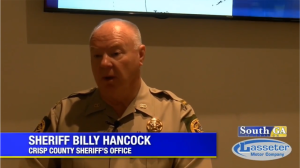 He hopes he never sees a flood of that magnitude ever again.

“Oh, I really don’t, not in my lifetime, not as a citizen, because it was really very dramatic for a lot of our citizens, and our people that lived out there. It was very taxing on all of our services here in our community, but I do remember our people standing up and stepping up and doing what was needed to make this happen. And, we didn’t lose any life here in Crisp county due to the Flood of ninety-four, and that was something we are proud of,” said Sheriff Hancock.

“It kept rising until it was going to overtop our dam, which is an earthen dam, which is never intended to have water going over the top,” said Steve Rentfrow, Retired General Manager of Crisp County Power Commission.

“At that point, there was nothing we could do. There was no way to stop the flow of water. We just had to let the flood recede and for things to return to normal so we could access the damage, and that began a two-year period of repair,” said Rentfrow. 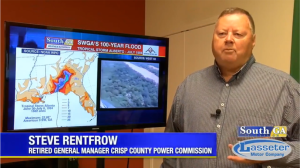 “The reality is if we had the amount of flow again that we had in 1994 the results would not be drastically different. There’s just nothing anyone can do when you have that amount of water coming down… it’s out of control,” said Rentfrow.

“I think we got up to six inches above normal full pool, and that’s when everyone became concerned at that time,” said Ford.

“The National Weather Service out of Atlanta, they were giving us reports of what to expect of what the increases would be, and they had to continue to revise those numbers as time went on,” said Ford. 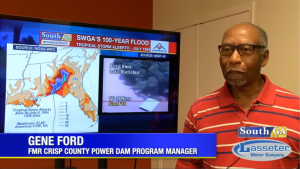 “But, what we didn’t realize was that there were openings in the powerhouse through the units. So, the water actually backed up through the units and filled up into the control room about two and a half feet, I think. Somewhere in that range,” said Ford.

“We had sandbags on the walls thinking that was going to hold everything off. But, as you heard before from Steve, the dam breeched, and that was about the end of any efforts that we could put into play to help,” said Ford. 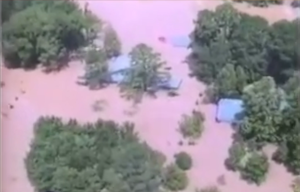 “Downstream of us… the waters were already down at Albany, because it was coming out of Americus and Chokee Creek, and filling up the river and going down toward Albany. So, Albany was pretty much flooding at the time even before the dam broke,” said Ford.

“It would probably be worse if you got the same conditions with the runoff,” said Ford.

To read more on the Flood of 1994 caused by Tropical Storm Alberto click here.

Summer Shears And Then Some