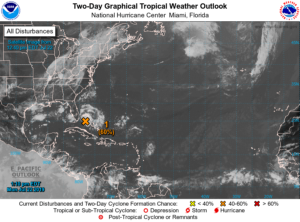 Latest outlook from the National Hurricane Center shows that an area of thunderstorms the result of a  low pressure system located near Andros Islands in the Bahamas has increased in activity. The environment in this area is marginally conducive for development, only a slight increase in the organization of this system could result in the formation of a tropical depression later today or tonight.

Additional development is not anticipated after this, how ever the NHC gives a 60% chance of a Tropical Depression forming soon.

Storm surge is water from the ocean that is pushed toward the shore by the force of the winds swirling around a hurricane. Storm surge is fast and can produce extreme coastal and inland flooding. When hurricanes cause storm surge, over 20 feet of water can be produced and pushed towards the shore and several miles inland destroying property and endangering lives in its path.

TORNADO WATCH HAS BEEN EXTENDED