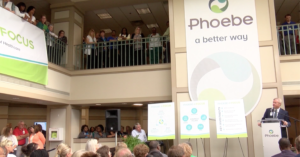 This comes after Steiner announced a quarter billion dollar initiative for the hospital in the fall.

Steiner tells us, ”We’re getting ready to kick off our focus groups. We’re gonna have five focus groups that are going to help us design that new emergency room, as well as our NICU. We’re already planning our upgrades of our O-R’s. Private rooms will also happen over time…”

One of the biggest hurdles that Steiner brought to the county commission Monday was a shortage of nurses.

It’s a problem that not only the Phoebe system is facing, but the state of Georgia is as well.

“We have multiple plans to combat that shortage, a lot of those are in partnership with our local universities like Albany State. We’re also talking to Albany Tech. And we’re trying to be as innovative, and unique as possible,” says Steiner.

As well as addressing the statewide concern on a shortage of nurses, Steiner is also planning for the health system to take on the trauma center responsibilities for Thomas County.

He says, “We’ve recently been told that Thomasville is considering dropping their trauma designation. Which will widen the gap of trauma care for Southwest Georgia. The nearest is in Columbus and Macon. And again, in trauma, people usually die of blood loss, so time is of the essence.”

Phoebe Putney will be finishing construction on their helipad and new facilities over the next few months.