Opening statements were made on the first day of Isaiah T. Gilyard's trial

ALBANY, Ga-In the spring of 2022, the Albany Police Department were on the lookout for 35 year-old Isaiah Thomas Gilyard. Gilyard was wanted after allegedly committing aggravated assault, robbing someone of their Gucci bag and committing criminal trespass.According to the official indictment issued in June of 2022, Gilyard is now being tried on the counts of…Count 1: Armed RobberyCount 2:Aggravated AssaultCount 3: Possession of a firearm during commission of a felonyCount 4: Possession of firearm by convicted felonMonday, January 23rd, 2023, marked day one of his trial where both the prosecution and the defense presented their opening statements to the jury.According to the Albany Police Gilyard allegedly approached the victim, Brad Johnson in his car at the Luxury Inn in Albany. 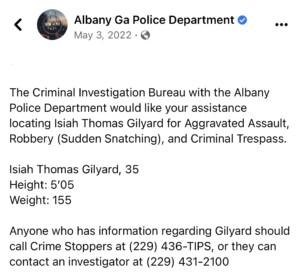 The prosecution stated during opening remarks, “Evidence will show that he [Brad Johnson] was looking for a peaceful place, a quiet place to roll his marijuana.”That is when Gilyard allegedly approached Johnson in his vehicle and the two engaged in a verbal altercation. Gilyard then allegedly drew his handgun and pointed it at Johnson.He then “opened the door and told Mr. Johnson he was going to shoot him” the prosecution stated.Gilyard then allegedly grabbed Johnson’s Gucci bag from the passenger side floor board which contained “currency, personal hygiene items and a birth certificate belonging to Mr. Brad Johnson”, according to the State.The prosecution’s opening statement goes on to say the two continued exchanging words while the gun was pointed and the alleged robbery was taking place.“The evidence will show that Mr. Brad Johnson was in fear for his life” the prosecution stated. “So much so, that he instantly, when that Gucci bag was taken, sought to escape that situation and he began to drive off. When he began too drive off, Mr. Gilyard, who already received his ill-gotten gaines, fired upon the car that Mr. Johnson was in.”After the alleged gunfire, the bullets were said to hit the windshield and car seat, then Gilyard took off on foot.Albany Police Department did not issue a public statement searching for the defendant until May 3rd. The alleged incident is said to have occurred on March 15th, 2022 at approximately 3:40 p.m. in “broad daylight”, according to the defense.Before the jury entered the courtroom, the prosecuting attorney addressed the court and Judge Willie Lockett with concerns regarding an alibi. It was stated the defendant was in Cobb County, Georgia at the time of the crime.The State asked the court to “exclude the defense council from mentioning the alibi [in opening statements] unless we know for sure the defendant is going to speak on his matters”.The prosecution continued with “Judge, I am not asking that the alibi be denied by the court. But I am asking for a reasonable amount of time for the State to enquire this witness with the nature of this alibi. And  so-stating in the opening could prejudice this case against the state… in the interest of fair play and justice I ask the court to grant the state’s request that the alibi notice not be aired with the jury at the time.”This issue came about when the State was unable to get in contact with the witness who provided the alibi.The defense replied, “with regards to the phone number itself, I too had called the number that was initially given to me. I did not receive news of Mr. Spalding’s new number until this morning… with regards to the opening statement, I have no objection to that. I can totally give an opening statement without reference to the alibi.”And they did.After the State delivered opening remarks, the defense addressed the jury.The defense opened by arguing with the State’s prior statement. Making a point to the jury saying they (the defense) believe the jury will find the defendant not guilty due to lack of evidence.“While you may hear the testimony of the officers [and of] Brad Johnson, you’re not going to hear the testimony of anyone else with regards to this. This allegedly occurred in broad daylight. The State is trying to allege the gun was fired in broad daylight, with no witnesses around” the defense sated. “You’re not going to see any pictures of Mr. Gilyard present there. You’re not going to see any videos of Mr. Gilyards presence at the scene. You’re not going to see any evidence whatsoever of Mr. Gilyard being at the scene where this allegedly took place… on an afternoon, in broad daylight, in March.”It is unknown the amount of time Gilyard is facing if convicted on all four charges. However the trial is set to resume tomorrow morning.South Georgia Television will continue to provide you with updates.