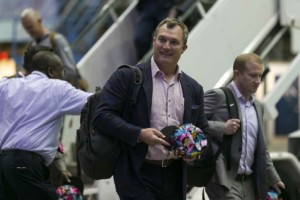 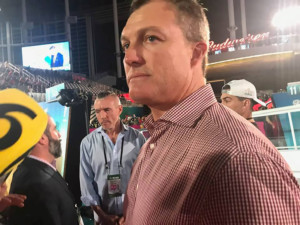 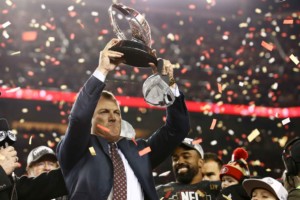 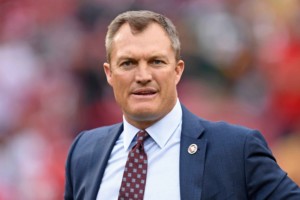 (CNN) — San Francisco’s “Captain America” has reached the Super Bowl™. And so have I.

When I found out that I’d have the privilege of covering the San Francisco 49ers and Kansas City Chiefs in Super Bowl LIV™, I knew I had to profile 49ers general manager and Pro Football Fame finalist John Lynch.

Perhaps the byline might give you some clue as to why.

We were both born in the Chicagoland area and will both be watching Sunday’s Super Bowl™ at Hard Rock Stadium in Miami Gardens, Florida. But that’s where the similarities probably end.

We crossed paths for the first time inside Marlins Park, at Opening Night.

For those not familiar, Opening Night is a frenzy, where members of the media are packed like sardines interviewing players, coaches and team executives. Nonstop for an hour, they’re hit in all directions with different types of questions. It’s loud. It’s borderline chaotic.

I spotted him talking to a TV reporter behind a rope near the stage, so I scrambled around the corner to see if I could talk to him. But by the time I got over there, about 10 other media members got there ahead of me and started asking questions.

I was running out of time. After 10 minutes or so, a team spokesperson said there would be two more questions. I snuck closer to the rope.

And, with the final question, I made my move.

I showed him my credential with my name on it, and Lynch chuckled.

I then asked what it was like to be in this moment with this team right now. He replied that it was awesome to be here and be in the Super Bowl™ again. Then, just like that, the 49ers got him out of there.

Hard-nosed mentality
One of the hardest-hitting safeties to ever play the game, Lynch made the Pro Bowl in nine of his 15 seasons in the NFL and was selected to the All-Pro team twice.

He won Super Bowl XXXVII™ as a member of the Tampa Bay Buccaneers 17 years ago. This is his first time experiencing the Super Bowl as a team executive.

“I never thought you could equal the feeling of going to the (Super Bowl™) as a player, but this one’s just as good,” Lynch told NBC Sports Bay Area in the 49ers locker room after his team won the NFC title against the Green Bay Packers.

He spent eight seasons as a color analyst on Fox’s NFL coverage, but he left in 2017 to tackle a new challenge as general manager of the 49ers.

“I remember my wife not being too happy I was going to do this because I really did have a nice job,” Lynch said to NBC Sports Bay Area. “But something was pulling at me to compete and be a part of a team.”

Lynch had a big task in front of him when he got to California.

The five-time Super Bowl™ champs had only three winning seasons in the previous 16 and had only one Super Bowl™ appearance since last hoisting the Lombardi Trophy right here in Miami 25 years ago.

But Lynch took that hard-nosed mentality he had on the field into the front office.

He hired Kyle Shanahan, who had just been the offensive coordinator for the Atlanta Falcons during their NFC Championship season in 2016, as his head coach, and the dynamic duo got to work.

The first two years didn’t produce a lot of results on the field, the 49ers winning 10 of 32 games. But a foundation was being laid, and it sprang to life this season.

Forty six of the 53 players on this year’s roster were acquired in the three seasons Lynch and Shanahan have been at the helm, including stars like Jimmy Garoppolo, Richard Sherman and Nick Bosa.

The 49ers ended with a 13-3 regular season, the top seed in the NFC playoffs and a dominant performance in the playoffs that saw them outscore their opponents (Minnesota and Green Bay) 64-30 on their way to a Super Bowl™.

Lynch was named executive of the year by the Pro Football Writers of America, something his right-hand man Shanahan saw he could become from the moment they started working together.

“When you were as good a player as he was, when you’re as smart as he is, when you have the passion he has … I knew he’d be very good at being a general manager,” Shanahan told the San Francisco Chronicle. “I call him ‘Captain America’ because it’s true in how he asks and stuff. He’s like that all the time.”

“Captain America” could claim another massive honor this weekend in Miami. Lynch could be elected to the Pro Football Hall of Fame when modern-era players are selected on Saturday. It’s the seventh straight year Lynch has been a finalist for the Hall.

When asked about the possibility for pulling off a rare Hall of Fame and Super Bowl™ double, he said, “I’ve dreamt about it. It could be a real nice weekend.”

A “real nice weekend” could be in store for both of us here in South Florida.

Rep. Omar: McCarthy is a liar and a coward

Rep. Omar: McCarthy is a liar and a coward