Last week to register to vote 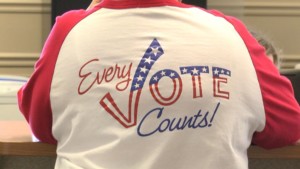 (ALBANY, Ga)- The November General Election isn’t far off, but time’s running out for those who need to register to vote.

“We want to make sure that, since it’s a mayoral race, that you must reside within city limits in order to be an eligible voter. So you want to make sure if you have recently moved out of the county, into the city, that you are in the city on your voter registration. So that you’ll be eligible to vote for those who represent you,” says Dougherty County Supervisor of Elections, Ginger Nickerson.

While getting to the office of voter registration may not be possible, there is a way around this thanks to the Secretary of State.

Nickerson says, “There’s an app for that, in the app store, under the Secretary of State. You can download the app on your phone. This will allow you to verify your precinct information. Also, several ballots will be posted there when they are available as well.”

Regardless of how it’s done, the office of voter registration wants to make sure you are ready to get out to the polls in November.

The Office of Voter Registration tells us early ballots will begin on October 14th for those who will not be able to vote on November 5th.