Families speak about reunification in Tifton 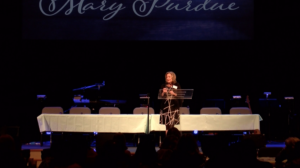 (TIFTON, Ga)- There’s the old saying — “it takes a village to raise a child” — and that was on display Thursday night in Tifton.

More than 100 people came together with one thing in common: they were all families reunited with their children in foster care.

It’s an effort that former First Lady of Georgia, Mary Perdue knows what the people have gone through as someone who has been a foster parent for infants over the last 20 years.

Several Tifton mothers spoke to the crowd about what it meant to work with the department to be back in their children’s lives.

We caught up with several mothers who spoke about being reunited with their children in recent years.

Sarah Luke was reunited with her daughter earlier in June, after being in custody since November 2016. She tells us, “Reunification for me is just restoration of family, the broken hearts that came along with it. So, it’s just a huge part of our lives.”

Bri Stephanson was reunited with her son in October 2018. She says, “Unification to me is more important to me than anything really. My son deserves it, and really every child deserves a mother.”

While Amanda Mansfield, was reunited with her son in July of 2018. She tells us, “I honestly believe that despite a lot of our issues growing up, trauma shouldn’t define who we are as parents. So as long as we’re able to work through that, I think unification with our kids should be the top priority.”

The Division of Family and Children’s Services is working to build a faith-based support network for foster children.

American Legion celebrates Memorial Day differently due to the pandemic