CORDELE, Ga. — Two people escaped with only minor injuries after the vehicle they were riding in collided with an 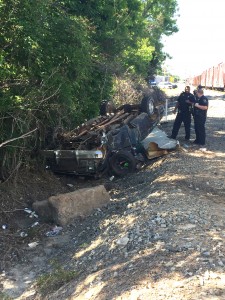 Witnesses at the scene said two people were in the vehicle at the time of the collision. Both were taken to Crisp Regional Hospital.

When South Georgia TV arrived on the scene the crossing gates were down, the red warning lights were operating and the warning bell was sounding.