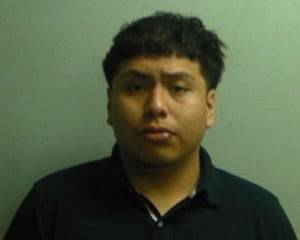 The vehicle would not stop but later exited I-75 at mile marker 84 near Ashburn.

Little says the driver attempted to turn east onto College Street, lost control, and struck a building. The driver fled on foot, and the passenger was arrested.

Turner County EMS checked out both subjects, and they were transported to the Crisp County Detention Center.

Joel Gaspar is charged with driving while license suspended, fleeing or attempting to elude, possession of firearm/knife during a crime, felony possession of marijuana, obstructing or hindering law enforcement officers, speeding in excess of maximum limits, and numerous traffic violations.

Josue Gaspar is charged with possession of firearm/knife during a crime, felony possession of marijuana, obstructing or hindering law enforcement officers.

“I would like to thank Turner County Sheriff’s Office, Ashburn Police Department, Georgia State Patrol, and Turner County EMS for assisting us in this incident,” stated Sheriff Billy Hancock.

Meth in the mail suspect arrested