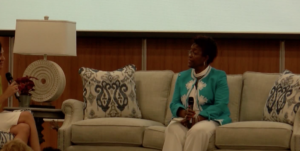 (ALBANY, Ga)- Albany Mayor, Dorothy Hubbard announced late last week that she will seek re-election as mayor of the City of Albany.

Mayor Hubbard will seek a third term as mayor of the Good Life City.

We spoke with her over the phone about the re-election bid.

She told us, “I am seeking re-election for a third term. I am standing on the record of the accomplishments that we have made.”

Greed is back on Wall Street, and 4 other business stories you need to read