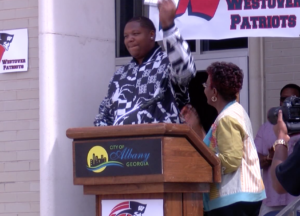 (ALBANY, Ga)- The City of Albany celebrated a former Westover High School football player Saturday for his recent success with the New England Patriots this past February.

Offensive Tackle, Trent Brown was celebrated as a Hometown Hero in Albany for his efforts.

Brown tells us, “For me to come home and to make this day happen. To show everyone that no matter where you come from, as long as you work hard in this life, you can make it happen.”

Now the highest paid player at his position in the National Football League, brown came back to Albany as a hero and an inspiration.

With many of his loved ones and coaches talking about how Brown reached the top of the mountain.

His uncle, and Newton County Sheriff, Ezell Brown told the crowd, “Trent took some choices, and you se the chances, and you see where he is today. All of us took chances and afforded us to be where we are today.”

Many of the speakers told the younger members of the crowd in attendance to never stop reaching for the heights Brown has reached.

Brown’s former coach, Octavia Jones said to those in attendance. “Trent was not afraid to dream big, and you see where he is niow. On the largest stage of his profression. The best of the best at his position.”

Brown will start for the Oakland Raiders in the 2019 NFL season.