Semi overturns on I-75 ramp

CORDELE, Ga. — Traffic was slowed after a semi truck overturned on the Northbound on-ramp for I-75. 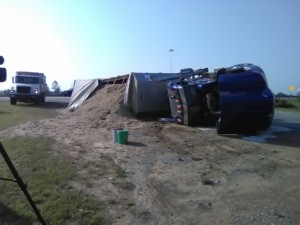 According to Major Jeremy Taylor with the Cordele Police Department the driver was traveling East on Hwy. 300 and turned to travel north on the interstate. The driver was transporting a load of crushed, dried peanut hulls and informed first responders that as he turned onto the on-ramp the load shifted which caused the tractor-trailer to begin to tip. 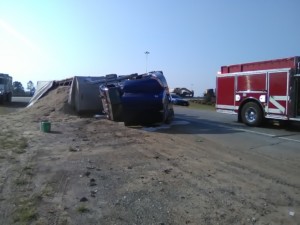 Major Taylor said the driver attempted to speed up to compensate but the load caused the semi to overturn. Georgia State Patrol, Cordele Police and the Cordele Fire Department responded to the scene. Due to oil leaks from the semi, fire fighters cleaned up at the scene.

The driver, whose name has not yet been released complained of neck and back pain and was transported by EMS to Crisp Regional Hospital for further evaluation. He was wearing his seat belt and when the semi turned over on the passenger side the driver was hanging from the seat belt.