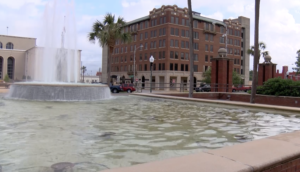 (ALBANY, Ga)- Downtown Albany is about to get a big boost to its economy.

The Albany City Commission approved the $13.6 million plan for 207 Pine Avenue to remodeled into a hotel and Data Center at Tuesday morning’s meeting.

The building, was the headquarters for Albany Utilities for more than 40 years before being left vacant in 2017. Before that, the building was known as Hotel Gordon.

Albany City Manager, Sharon Subadan says the building will have a purpose again after the two-year vacancy.

Subadan tells us, “I think there was concern that we weren’t going to be able to do anything with it…We’re able to take this beautiful historic building, and restore it to something that’s going to be amazing.”

The developer for the project is J Car Development, owned by Jason Benedict. He’s looking forward to giving the almost 100 year old building a new look.

Benedict says, “I think the 207 Pine building has potential. It’s rare to find a property that was a functioning hotel that can be renovated and remarketed.”

In addition to revitalizing Downtown Albany, the renovated hotel will create more than 40 jobs when it opens.

Benedict already has his expectation on what the building will become.

“It’s just simply gonna be a totally different experience than anything else you have in this city,” Benedict says.

With approval from the city commission, plans are moving forward for 207 pine avenue and the next steps could be done in as soon as the next 90 days. And it’s a big step towards a revitalized downtown.

Benedict tells us work on the data system on the second floor could begin as early as mid-April, and the ground breaking could happen by the end of 2019.