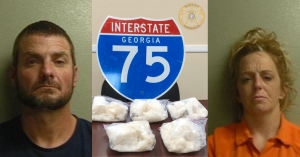 Willis is charged with Trafficking Methamphetamine, Violation of the Brake Light/Turn Signal, and Affixing Materials That Reduce or Increase Light Transmittance, in addition to Fairbank’s charges of trafficking methamphetamine.

On GA 401/I-75 near the 102 South Exit, a silver Honda Accord was stopped by a Crisp County Sheriff’s Deputy for a violation of the brake light and dark window tint. Both the driver and the passenger provided contradictory statements regarding the identity of the vehicle and its origin during the traffic stop. The driver refused to consent to a vehicle search upon request. The Crisp County Sheriff’s K9 was deployed when the deputy received a refusal. On the vehicle, the K9 displayed a positive alert.
Cash and five kilograms of suspected methamphetamine were discovered during the vehicle search. Without incident, Fairbank and Willis were taken into custody and taken to the Crisp County Detention Center. This investigation is still ongoing.