Atlanta Falcons will have intense competition during 2022 training camp

It's every man for himself as the Falcons fight for spots within their own roster, especially at quarterback. 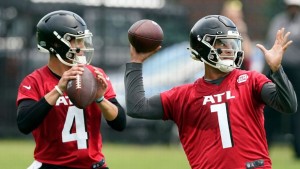 Per usual, nobody really knows how the Falcons’ season will unravel, but we do know that their training camp is going to be one of the most interesting in the National Football League.

Now you might be asking, “What can possibly be interesting about a team that’s lost more games than they’ve won for 6 of last 9 seasons?”

Almost every rotational spot on the roster is on the market, that’s what.

The Falcons easily obtain the most uncertain roster in the league right now. Teams such as the Rams, Bengals, Chiefs, Packers, Bucs, Titans and Colts don’t necessarily need to learn much about their teams during the training camp process. However, it’s quite different for Atlanta who has a fairly young team, signing a multitude of players since January through the NFL draft, free agency, trade and more. If signees weren’t new to the NFL, they are new to Atlanta. Regardless, both rookies and NFL vets are trying to prove themselves enough to grasp a spot in the Falcons final 53.

Having an abundance of  hungry, yet humble athletes competing to earn, keep or find their place will make this training camp intense on a daily basis. However, the competition doesn’t end within the team. Additionally, players will be fighting off athletes from other teams, leagues and free agents who are currently  being evaluated (if they haven’t been already) by Atlanta’s personnel staff.

To make this camp extra spicy, rookies will have every opportunity to make an instant impact in the two depth rotation.

The most heated and potentially important competition will be at quarterback between veteran Marcus Mariota and recent third-round pick, Desmond Ridder. This will be the first season since 2007 that Matt Ryan will not be named week 1 starting QB for the Falcons and though Ryan’s departure from Atlanta was for the best (though some Falcon fans will disagree), where one era ends another one can begin. The pick seems at this moment to be Mariota considering his history with head coach Arthur Smith back when they were both with the Titans. He is a talented quarterback and looked good when given his short-lived opportunities as Derek Carr’s backup with the Raiders. So, there is hope Mariota can rise from the ashes in Atlanta and experience the break through Ryan Tannehill did for the Titans when he replaced… Marcus Mariota.

Now, if Cincinnati alum Desmond Ridder wins the job, he would be the fourth rookie QB to start week one in Falcons history. Of course, the last rookie to do so was Matt Ryan in ’08, which turned into a 14 season career in Atlanta until his trade. So, I’d say it turned out pretty well… for Ryan at least. Ridder had 43 career wins at Cincinnati (third-most in FBS history) and set a variety of school and American Athletic Conference records. You can’t doubt that he has a canon for an arm and moves extremely well as a ball carrier. He obtained 3,334 total yards passing his senior year (10,239 total yards in his college career) and had over 2,000 total career rushing yards as a Bearcat. Now he isn’t Lamar Jackson fast, but he ran a 4.52 second 40-yard dash at the 2021 NFL Combine which is pretty well for a 6 foot 3, 200 pound QB. The potential for him to start week 1 is there and all of these those signs are positive, it means nothing until the pads are on and his quick decision making is tested in the huddle, line of scrimmage and post snap. Plus, Coach Smith must decide if his talent and abilities can translate to NFL play.

Speaking of Coach Smith, this is where it gets dicy: Do the Falcons give it a go with Mariota for a few weeks, receive expected results and then turn to Ridder? And if they do turn to the rookie, how much of a chance does he actually get?  If the Falcons get a high draft pick next year (and I’m predicting they will) do they go quarterback, and if so, what does that mean for everybody? The answer to that will come when it comes.

Rookie WR Drake London was drafted No. 8 overall in the 2021 NFL Draft is one of the Falcons strongest additions this year. As mentioned earlier, he is one of the select few players who seem to have a secured spot. He will play right away because frankly, the Falcons need him to play right away. During training camp he will more than likely be worked in many spots (slot, out wide) to see where he fits best in Atlanta. He is a catch and run receiver, which is beneficial to the Falcons offense because of what could develop- a quick passing game to help offset concerns with protection. Not to mention he is an absolute unit coming in at 6 foot 5 and over 200 pounds. He is able to use his frame to high point the ball incredibly well and uses his body to shield defenders from the ball to secure the catch with his hands. London could improve in his route running and he is not the fastest receiver, but he is still quick and will definitely be an asset to the Falcons this season.

Coach Smith and Falcons GM Terry Fontenot aren’t the type of people to use excuses. If you have heard him speak, Smith routinely says that he was not blind to the challenges of rebuilding this team when he took over in 2021. It won’t be easy, but the Falcons are on their way to a new beginning as they enter an extremely intense training camp and then into their prove-it season filled will many unknowns. Never the less it will be heated, but also exciting as the Falcons enter a new era.