Alex Mixon: A Life Well-Lived on display at AMA 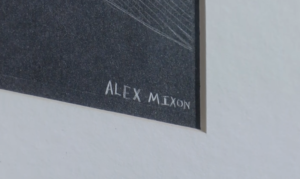 (ALBANY, Ga)- The art of Alex Mixon is on display at the Albany Museum of Art during the month of April.

Alex lived in Albany all his life, until he was shot and killed last November at the age of 27 during a delivery.

When asked about him, Alex’s wife, Taylor Mixon tells us, “All of his friends loved his art, people came to our house and would offer to buy things from him off of the wall, and we just wanted to do anything to share such a big part of him with everyone.”

Along with his family, Taylor has loaned Alex’s work to the museum for the month in an exhibit called Alex Mixon: A Life Well-Lived.

His mother, Barbara said that the pictures, and sculptures were done by Mixon from as young as elementary school.

It’s a celebration of one of Alex’s biggest passions in life, and as his wife puts it, matched the vibrant personality he brought to his loved ones every day.

“He was a really silly guy, anybody who knew him knew he had a great sense of humor. And he was also a very spiritual person,” says Taylor.

As members of the Albany community take a look at Alex’s life work, his wife wants people to see Alex for how he lived life, and not how he was taken away.

She says, “I think it’s important to share something positive about Alex. I think having his name in the limelight matters the most to me and his family. And we want to share love with the community.”

Though Alex may be gone, his memory lives on through not only his art, but the people who loved him and his body of work.

Alex Mixon: A Life Well-Live will be on display at the Albany Museum of Art through the end of April.