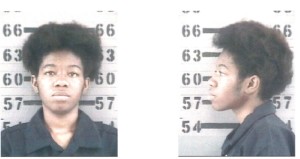 old Gregory Parker in a heinous crime committed against a three-year-old little girl.

The child remains on a ventilator at an Atlanta hospital after a FPU and Department of Family and Children Services investigation revealed that the three-year-old had been severely beaten and sexually assaulted. The child had injuries to her vaginal area, ribs, along with swollen hands and unknown trauma to her head. She appeared to have old wounds as well.
Police were called to the child’s home on May 13, 2019 around 7:30 a.m. regarding an unknown problem. When Officers asked what the problem was, Parker told police his step-daughter was unresponsive. The child was taken to the hospital by EMS.
Parker, who is the child’s stepfather, is now facing Aggravated Child Molestation, Rape, Aggravated Sodomy, Aggravated Battery, Battery, and Cruelty to Children in the 1st Degree charges.
The child’s mother, 19-year old Crystal Brooks, is also being charged. After being questioned, investigators discovered Brooks not only knew about the child being harshly treated by Parker but was also present. She is charged with Party to a Crime on the following charges: Aggravated Battery, Battery, Cruelty to Children in the 1st Degree and Giving a False Statement initially.
This case remains active and under investigation.
UPDATE: The Dougherty County District Attorney’s Office will be adding a felony murder charge to Parker. Brooks’ charges remain the same at this time.
Follow @SouthGATV

One Arizona county has so many vaccine doses, it's now able to offer them to anyone over 18